Reuben James Richards was born in the Caribbean and has lived in the UK since 1970.

For more than thirty years, he has forged a successful career in the music industry, performing at festivals, concert halls and large venues across the World. Reuben is a private man behind the scenes – but once on stage, his soul intention is to entertain an audience with a powerful, emotive performance and sublime vocals.

Reuben’s has an impressive résumé. As a versatile singer he has performed at prestigious venues and festivals across the UK, Europe, and in the United States – to include the classy and ever popular Boisdales venues where Jools Holland presides over a menu of top international musical acts. With the recent resurgence in Soul music and an ongoing appreciation from a new breed of the media of Reuben’s great talent, the album “About Time” was finally released. The album was recorded at The Grange Studios in Norfolk. Produced and engineered by one of the UK’s best producer, engineer and songwriter Dave Williams, which features all new recordings, with a remix of the original single, “Hold On My Heart”. Reuben is joined on the album by top musicians from the UK and USA, including again Muscle Shoals, Memphis, New Orleans and Nashville.

During the mid 1990’s, Reuben James Richards (then known as Reuben James) released what many believe now to be the greatest ever soul track recorded in the UK, “Hold on My Heart”. Described at the time by the late legendary producer, Jerry Wexler, as one of the greatest voices he had heard in a decade, the teaming of Reuben with the original Muscle Shoals brass section together with Rhodes, Chalmers and Rhodes on backing vocals, created a single which captured the very essence of authentic Southern Soul.

Reuben was also asked to appear on ITV’s ‘Stars in their Eyes’ where he performed as the ‘Wicked’ Wilson Pickett which bought massive accolades with his rendition of ‘In The Midnight Hour’; where it was easy to see why he can perform such an amazing set of classic soul tunes by some of the most prestigious artists like, Wilson Pickett, James Brown, Sam Cooke, Otis Redding, Ray Charles and many more. His versions of Jimmy Hendrix (as appropriate) have also become notable.

With the recent resurgence in Soul music and an ongoing appreciation from a new breed of the media of Reuben’s great talent, the album “About Time” was finally released.

Reuben is widely admired for his style, charisma, stage presence and great rapport with any audience. Likened by Blues Matters Magazine to other great performers Sam Cooke and Ray Charles, he has a rich track record as a versatile performer and is, as described by Blues In Britain magazine, ‘an amazing frontman and vocalist’.

As well as many new recordings, “About Time” features a remix of the original single, “Hold On My Heart”. 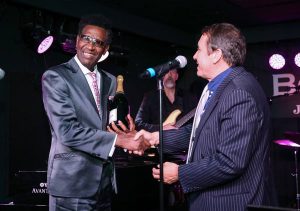 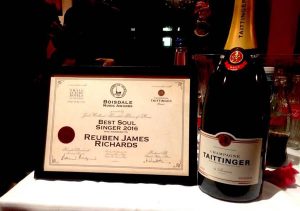 Reuben Richards receives the award for ‘Boisdale’s Soul Artist’ of the year 2016, presented by Jools Holland which comes from a really impressive residency with sell-out audiences.Reuben is a regular at many of the Boisdales venues, he has performed at many high profile clubs like, The Marx Club, The Hideaway, Pitcher & Piano, Quaglinos, Hippodrome Casino and many more around the country and around the world.

He has performed in countries from USA to Australia, France, Italy, The Middle East and Africa, including Zambia.